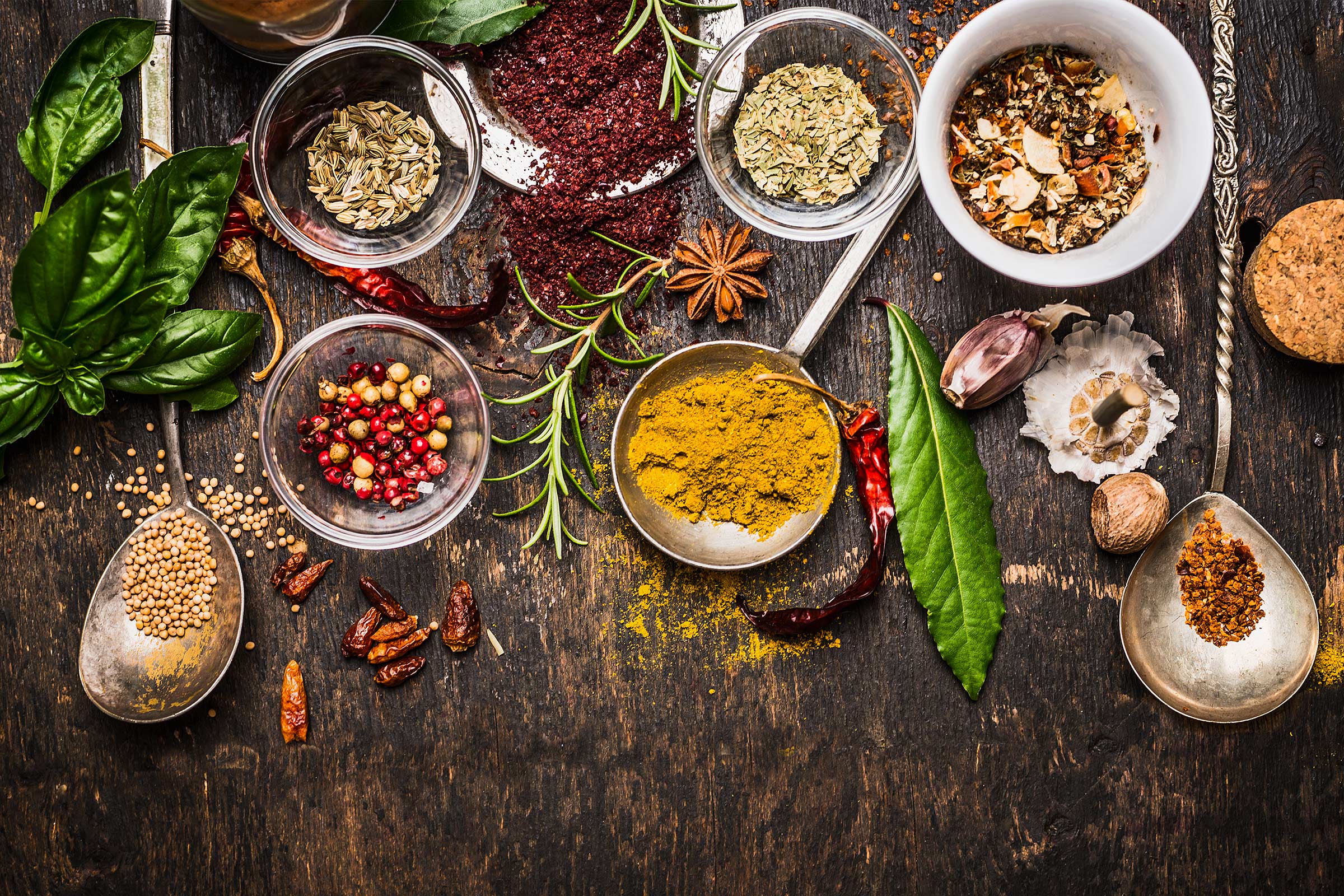 10 Herbs and Spices to Make You Healthy

Spices do more than make food taste great. Recent research is showing that spices can reduce signs of aging, inhibit degenerative disease, and promote health and wellbeing. The Mediterranean diet, so often associated with good health and lack of disease, relies heavily on the use of spices. But you don’t have to follow the Mediterranean way of eating to gain the amazing health benefits these inexpensive flavor boosters have to offer.

Spices have been highly valued throughout history. In 2300 B.C. the Assyrians wrote that the gods drank sesame seed wine before creating the earth. Spices were the currency that sent adventurers across unknown oceans to find new trade routes. Columbus discovered the New World during a trip in search of spices, and the British Raj occupied India to access its spice and tea trade.

In 1983, the British discovered that powdered ginger is twice as effective as Dramamine in preventing motion sickness. This discovery marked the beginning of spices being scientifically evaluated in terms of their health benefits. And what the researchers found was truly amazing.

Recent research continues to show the power of spices

Spices have more antioxidant power, measure for measure, than fruits and vegetables. Antioxidants help prevent cancer, Alzheimer’s disease, heart disease, and premature aging. In a study reported in the British Journal of Nutrition, fifteen aromatic herbs and spices consumed in Central Italy as part of the Mediterranean diet were studied to reveal their antioxidant capacity as measured by oxygen radical absorbance capacity (ORAC). Comparison was made between salads to which various herbs had been added. The addition of lemon balm and marjoram increased by 150% and 200% respectively the antioxidant capacity of a salad portion, corresponding to an intake of 200 mg. of phenolics and 4000 ORAC units. Among other spices tested, cumin and fresh ginger made the most significant contribution to antioxidant capacity.

The Journal of Medicine and Food also reported an investigation in which researchers bought 24 herbs and spices at a local supermarket. After testing them they found that many appeared to have the power to inhibit tissue damage and inflammation brought on by high blood-sugar levels. They inhibited the glycation process which has been linked to inflammation and tissue damage in diabetics. The spices with the greatest effects were cloves, cinnamon, allspice, apple pie spice, and pumpkin pie spice. Top herbs included marjoram, sage and thyme.

What else can spices do? Anise, basil, cumin, dill, sage, fennel, mint, oregano, pickling herb, rosemary, sage, savory, fennel, sumac, and thyme can protect against aflatoxin, a potent carginogen found in improperly stored grains and peanuts, according to a study reported in the Journal of Medicine and Food. Many common spices can slow the growth of Bacillus bacteria in food and retard food spoilage.

Herbs and spices control Candida, keeping growth within acceptable levels. Consistently adding them to food works wonders for those experiencing the discomfort of Candida. Herbs and spices form the basis of Cand-X (90), the best agent for addressing Candida overgrowth.

Spices that stand out for their health benefits

All spices are loaded with health benefits. The addition of any of them to a prepared dish, drink or in a supplement form will help to reduce free radical damage and combat the effects of aging. Most offer anti-cancer benefits too. Here are a few common herbs and spices that provide outstanding benefits.

Cinnamon – Three key proteins are highly important in insulin signaling, glucose transport and inflammatory response, according to Richard Anderson, a researcher with the U.S.D.A. Cinnamon has insulin-like qualities that come from the release of these proteins. His and other studies have shown that just ¼ teaspoon of cinnamon a day can help lower the risk of the constellation of factors associated with metabolic syndrome – high blood cholesterol, triglyceride and glucose levels – by as much as 10 to 30 percent.

A study in Hormone Metabolism Research found that cinnamon prevents insulin resistance even in animals eating a high-fructose diet.

Cinnamon is anti-microbial and can stop the growth of bacteria, fungi and yeast, and is one of the spices in Cand-X (90). A study in the International Journal of Food Microbiology found that a few drops of cinnamon essential oil added to food is a powerful natural preservative.

Cinnamon has anti-clotting and anti-inflammatory properties which reduce clumping of blood platelets. It is suspected that cinnamon boosts brain function. Of all the spices, cinnamon is one of the richest sources of antioxidants.

Ginger – Gingerol, the active ingredient in ginger, has been shown to significantly help with nausea, vomiting and morning sickness, as well as motion sickness. It is another powerful antioxidant that is thought to relax blood vessels, stimulate blood flow and relieve pain. It is a common digestive aid and useful for people suffering the side effects of chemotherapy. Its anti-inflammatory abilities make it useful in fighting heart disease, cancer, Alzheimer’s disease, and arthritis.

Oregano – Oregano has potent antibacterial properties. A study in Mexico found oregano to be more effective against an amoeba than a common prescription drug. Oregano works in the intestinal tract to kill unfriendly bacteria and fungus without damage to the friendly bacteria. It is highly effective against candida albicans overgrowth throughout the body, particularly in the sinus cavities, and is a component of Cand-X (90). Oregano has 4 times the antioxidant activity of blueberries.

Rosemary – In winter a rosemary bush inside the house acts as a natural air cleaner and freshener, along with being a source for the herb to use in cooking. Rosemary stops gene mutations that could lead to cancer and may help prevent damage to blood vessels. It reduces heart attack risk and has strong anti-cancer action.

Turmeric – This bright yellow spice of Indian cuisine is one of nature’s most powerful healers. It is a potent anti-inflammatory that acts as effectively as drugs such as hydrocortisone, phenylbutazone and Motrin. It is helpful with inflammatory bowel diseases, Crohn’s disease, ulcerative colitis, rheumatoid arthritis, cystic fibrosis, cancer and Alzheimer’s disease. Recent research shows it as positive for cardiovascular and liver protection.

When combined with cruciferous vegetables, (broccoli, cabbage, kale) turmeric has shown to prevent prostate cancer and stop the growth of existing prostate tumors. It prevented breast cancer from spreading to the lungs in mice. It may prevent melanoma and cause existing melanoma cells to die. Turmeric may prevent metastasis from occurring in many different forms of cancer.

Turmeric has been shown to reduce the risk of childhood leukemia, and shows promise in slowing the progression of multiple sclerosis. It is a natural liver detoxifier and one of nature’s most effective pain relievers through inhibition of COX-2.

Garlic – This wonder drug of nature destroys cancer cells and may disrupt their metabolism. Studies show that two cloves of garlic weekly provide cancer-protective benefits. A recent study showed that eating garlic boosts the body’s supply of hydrogen sulfide, which acts as an antioxidant and transmits cellular signals that relax blood vessels and increase blood flow.

In another recent study, researchers extracted juice from supermarket garlic and added small amounts to human red blood cells. The cells immediately began emitting hydrogen sulfide. This ability to increase hydrogen sulfide production may explain why a garlic rich diet is so protective against various cancers, including breast, prostate and colon cancer. It may also explain why garlic appears to protect the heart. Injecting hydrogen sulfide into mice almost completely prevented the damage to heart muscle caused by a heart attack.

Garlic also has a reputation as a preventative and treatment for the common cold. Is used to treat the symptoms of acne, and there is evidence that it can assist in managing high cholesterol levels.

Sage – This herb contains flavonoids, phenolic acids and enzymes that promote oxygen movement in the body. This results in its ability to prevent oxygen-based damage to cells. Sage may fight rheumatoid arthritis, bronchial asthma and atherosclerosis. It appears to promote better brain function. A study showed that people given sage essential oil had significantly improved recall abilities compared to those given a placebo.

Coriander – These seeds from cilantro are effective against swelling, high cholesterol levels, diarrhea, mouth ulcers, anemia, digestion, menstrual disorders, conjunctivitis, and skin disorders. Coriander is protective of the eye by preventing macular degeneration and soothing the eye against stress. It has a stimulating effect on production of insulin, resulting in increased insulin in the blood to aid in proper assimilation and absorption of sugar.

Parsley – Chief among the abilities of parsley is fighting cancer. Animal studies have shown that parsley inhibits tumor formation, particularly in the lungs. It neutralizes carcinogens, including those found in cigarette smoke. It is a good source of antioxidants and heart-healthy nutrients such as beta-carotene, folic acid, and Vitamins A and C.